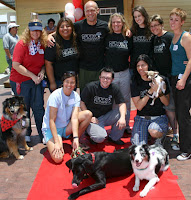 Splash! was picked as one of the two finalists in Canine Runway from San Diego.  The next level is in Los Angeles and finally Los Vegas!  Guess who was one of the two runners up? KIKO!
Keep paws crossed for Splash! 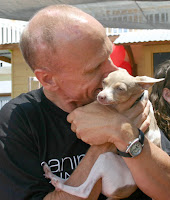 Kiko sucks up to one of the judges after the prizes! 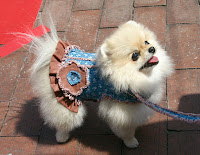 My friends Pom Libby should have one if it was based mainly on Fashion (which it should have been according to the rules), as she is awesome at making dog leashes and harnesses... Not to mention how ADORABLE Libby is being only 2 pounds.

A fellow youtube clicker trainer and friend Nan Arthur filmed the event, check out the videos-

Posted by Emily Larlham at 8:32 PM No comments:

Kiko gets a perfect score and 1st place again!

KIKO ROCKS! With a perfect score of 100 and a first place.
I was very pleased. My friend filmed for me but instead of recording during, she had the camera on standby by mistake! I thought that was hilarious.  I was horrified today about how cruelly the other owners treat their dogs. One mans dog ran away from him in the ring, and ran right out of the ring. Someone caught it and when he got it back he basically  beat the crap out of it, and I started to yell "hey! What are you doing?' while the judges looked the other way, when some friend of his pulled him away. That is a great way to teach your dog to never come to you when he runs away.  Another man grabbed the hair on the top of his dogs skull and yanked it before entering the ring while the dog was doing nothing wrong, I suppose like an 'or else' and of course, the dog didn't listen and they didn't qualify.  Someone consoled him afterwards saying "Don't give up!" and I was thinking 'Oh no! Don't say that!'  There were so many dogs there that looked like their one wish in life was to get as far away from their owner as possible and especially NOT do rally with them.  I felt proud of my little Kiko, who did all these silly exercises for me, not because I MADE her, not because she wanted to please me, but because she ENJOYS doing them and playing our games.  She was the only dog in Rally Novice A who ENJOYED being in that ring (there were two other clicker trainers in the higher levels, who you could see the dogs were dancing through it like Keeks).
Tomorrow we do our 3rd Leg. Fingers crossed, but who needs luck? And who cares if she chooses not to do anything? She will still want to come home with ME at the end of the day! :)
Happy training to all!
Posted by Emily Larlham at 2:49 PM 2 comments:

Today was Splash's first training lesson in painting. 4 days ago she painted the living room with blue ultramarine paint that she had taken from my studio.  I took it as a sign she was needing a bit more creativity in her life... :)   Check out the youtube video - http://www.youtube.com/watch?v=zwO9nJGnstg
Posted by Emily Larlham at 11:30 PM 2 comments: 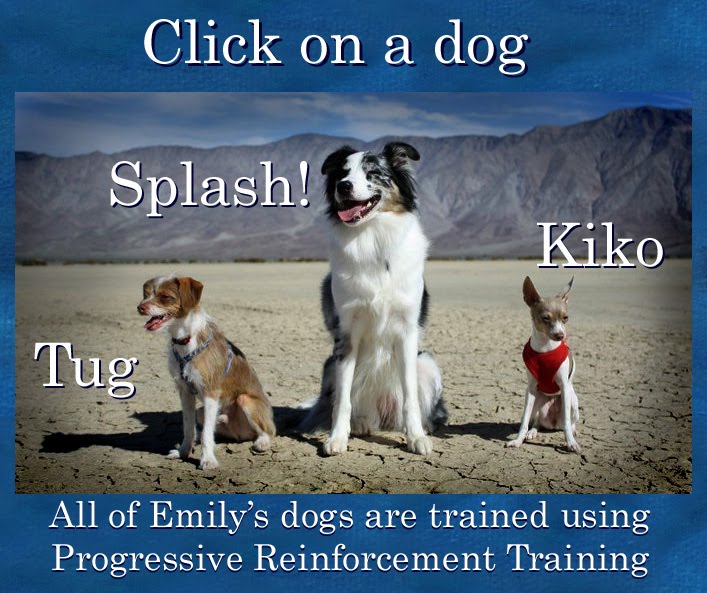